I will presenting a series of workshops on Hermetic Divination which will be hosted at the Hidden Gem in Observatory, Cape Town.

Every culture has myths of so called visitors from the stars, in reality the Dark Lords. In the book of Jubilees, the Book of Enoch, and the Book of Daniel, they are known as Watchers. They appear in the myths of many diverse cultures, and folklore, sometimes passing themselves off as beings that came from the stars, even calling themselves star gods. The emperors of Japan, the Kings of the Aztec’s, and Mayans, are said to be descendants of the star gods, or Dark Lords.  The Babylonians, Greeks, Romans, and all ancient cultures, recorded a race of beings displaying great powers of intellect, huge size and great strength.

The Watchers are also considered the fallen angels which are called forth in ceremonial magic, the beings who guard portals that link worlds together. Within such systems they are viewed as a spiritual race, a set of deities, or as spirits of the four elements. The Watchers are associated with the four quarters of north, east, south, and west. In some Traditions the Watchers are associated with the four elements of earth, air, fire, and water, they are also linked to each solstice and equinox, as well as to a specific star. In the early stellar cults of Mesopotamia there were four “royal” Stars (known as Lords) which were called the Watchers. Each one of these stars “ruled” over one of the four cardinal points common to Astrology. This particular system would date from approximately 3000 BC. The star Aldebaran, when it marked the Vernal Equinox, held the position of Watcher of the East. Regulus, marking the Summer Solstice, was Watcher of the South. Antares, marking the Autumn Equinox, was Watcher of the West. Fomalhaut, marking the Winter Solstice, was Watcher of the North. In the star myths the Watchers themselves were depicted as gods who guarded the Heavens and the Earth. Their nature, as well as their “rank”, was altered by the successive lunar and solar cults that replaced the older stellar cults.

In one version, a group of fallen angels described in Biblical apocrypha mated with mortal women, giving rise to a race of hybrids known as the Nephilim, who are described as giants in Genesis 6:4. A different idea of the Grigori appears in some traditions of Italian witchcraft where the Grigori are said to come from ancient stellar lore. References to angelic Grigori appear in the books of Enoch and Jubilees. In Hebrew they are known as the Irin, “Watchers,” found mentioned in the Old Testament Book of Daniel.  In Jewish legendary lore, the grigori are a superior order of angels in both the 2nd and 5th Heavens (depending on whether they are the holy or unholy), they resemble men in appearance, are taller than giants and are eternally silent.

According to The Book of Jubilees, the watchers were sent by God to instruct the children of men, but they fell after they descended to earth and started co-habiting with mortal women. In Enoch I there is mention of 7 watchers, and here the story is that they fell because they failed to appear on time for certain tasks apportioned to them. Some versions of rabbinic and cabalistic lore speak of good and evil watchers, with the good watchers still dwelling in the 5th Heaven, the evil ones in the 3rd Heaven (a kind of Hell-in-Heaven realm).

In the recently discovered A Genesis Apocryphon, Lamech suspects his wife, Bat-Enosh of having had relations with one of the watchers and that Noah is the seed of such a union. Bat-Enosh swears “by the King of the worlds” that the fruit is his (Lamech’s). The cause of Lamech’s suspicion is the fact that when Noah was born, he immediately started conversing with “the Lord of righteousness” and that his likeness was “in the likeness of the angels of Heaven.” Lamech hastens to his father Methuselah for enlightenment. Methuselah in turn appeals to Enoch for the truth. Since the Apocryphon breaks off here, we shall probably never know what Enoch told Methuselah. In Daniel 4:13, 17, the Hebrew prophet speaks of a watcher whom he saw in a vision coming down from Heaven with “a decree of the watchers.”

According to the Book of Enoch, the Grigori numbered a total of 200 but only their leaders are named:

In Enoch, the Watchers are angels apparently dispatched to Earth simply to watch over the people. They soon begin to lust for the human women they see, and at the prodding of their leader Samyaza, they defect en masse to marry and live among men. The children produced by these relationships are the Nephilim, savage giants who pillage the earth and endanger humanity. Samyaza, Azazel, and the others become corrupt, and teach their human hosts to make metal weapons, cosmetics, and other necessities of civilization that had been kept secret. But the people are dying and cry to the heavens for help. God sends the Great Flood to rid the earth of the Nephilim, but sends Uriel to warn Noah so as not to eradicate the human race. The Grigori are bound “in the valleys of the Earth” until Judgment Day.

The Watchers story in Enoch is derived from Genesis chapter 6. Verses 1-4 describe the “Origin of the Nephilim” and mention the “Sons of God” who beget them:

“When men began to multiply on earth and daughters were born to them, the sons of God saw how beautiful the daughters of man were, and so they took for their wives as many of them as they chose. Then the Lord said: “My spirit shall not remain in man forever, since he is but flesh. His days shall comprise one hundred and twenty years.” At that time the Nephilim appeared on earth (as well as later), after the sons of God had intercourse with the daughters of man, who bore them sons. They were the heroes of old, the men of renown.” (Genesis 6:1-4)

Here, the “sons of God” are given no specific name or function; they could represent fallen angels, or simply heavenly beings that mate with women.

The Book of Jubilees adds further details about the Watchers. While “Watchers” or “Sentinels” are mentioned alongside the “holy ones” in the Book of Daniel, angels were fairly popular in Jewish folklore, which often describes them as looking like large human beings that never sleep and remain forever silent.

Earlier mystical Hebrew sects organized the Watchers into an Archangel hierarchy. According to this system the Watchers were ruled over by four great Watchers known as Michael, Gabriel, Raphael, and Auriel. In the Old Testament (Daniel 4: 13 17) there is reference made to the Irin, or Watchers, which appear to be an order of angels. In early Hebrew lore the Irin were a high order of angels that sat on the supreme Judgment Council of the Heavenly Court. In the Apocryphal Books of Enoch and Jubilees, the Watchers were sent to Earth to teach law and justice to humankind. The most common associations found in various texts on Medieval magic regarding the Watchers are as follows:

It is these same angels who are referred to as the Sons of God in the Book of Genesis. According to Christian belief their sins filled the Earth with violence and the world was destroyed as a result of their intervention.

The concept of beings existing between Humans and Angels and associated with the Elemental natures of Earth, Air, Fire and Water was taught by certain Gnostic sects in the early days of Christianity. Clement of Alexandria, influenced by Hellenistic cosmology, attributed the movement of the Stars and the control of the four elements to angelic beings. 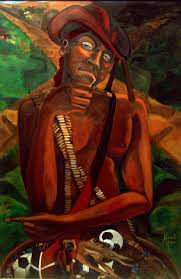